Where Are Men on Gender Equality?

More than 25 years since the landmark World Conference on Women in Beijing and the International Conference on Population and Development in Cairo, the world is further from achieving gender equality than it should be. Global data tracking progress on Sustainable Development Goal 5 show us that only 57 percent of women report making their own decisions about sexual and reproductive health and rights, with only three of every four women able to say no to sex – an essential dimension of bodily autonomy – and deciding about their own health care. Globally, women perform three to ten times as much unpaid care and domestic work as men. They also make up 70 percent of the global paid care workforce but represent only 25 percent of senior roles in that system. At the current rate of change, the world is at least 91 years away from achieving equality in unpaid care work between men and women, as the traditional gendered division of tasks between paid work and reproductive labor persists.

Behind all of these trends is the ongoing inequitable power, privilege, and gender norms related to men and masculinities. Indeed, women’s economic, social, and political inequality is inequality relative to men, whether it be men who hold political and economic power or men in their households and intimate lives. As such, the need for policies to support changing masculinities and men’s attitudes and behaviors is as urgent as ever. Furthermore, evidence shows that men and boys’ lives are also shaped by the gendered violence they experience in their homes, schools, communities, and male peer groups. And numerous studies have affirmed how men’s health and well-being are negatively affected by restrictive norms related to masculinity.

In the past two years of COVID-19 and the resulting global economic decline, the progress toward full equality for women and girls has been sharply set back. In this context, where progress has stalled or even reversed, it is imperative to ask: Where are men on gender equality? What are their attitudes and day-to-day lived experiences? Are men buying into or resisting the idea of gender equality? How are these issues similar or different by country  and cultural setting? How are men’s own lives affected by salient norms related to masculinities and other factors that shape their lived experiences? And importantly, how can the evidence that answers these questions be used to drive progress toward more equitable, caring, and nonviolent versions of manhood for the benefit of all? These are questions that the International Men and Gender Equality Survey (IMAGES) global data set can begin to answer.

What Is IMAGES, and Why Is It Important?

Led and created by Equimundo (previously Promundo-US), in partnership with Instituto Promundo in Brazil) and the International Center for Research on Women, IMAGES is one of the most comprehensive studies ever to explore men’s practices and attitudes related to gender equality alongside women’s. Using a wide variety of measures, IMAGES questionnaires investigate gender-based violence, health and health-related practices, household division of labor, men’s participation in caregiving and as fathers, men’s and women’s attitudes about gender and gender related policies, transactional sex, men’s reports of criminal behavior, and quality of life. Details on the IMAGES surveys can be found at www.menandgendersurvey.org.

The IMAGES questionnaire incorporates items from existing survey instruments on gender, quality of life, childhood antecedents of violence (including observing gender-based violence), health, sexuality, family gender dynamics, and fatherhood, as well as new items created specifically for the survey. It builds on the Gender Equality and Quality of Life Survey (GEQ Survey) first fielded in Norway, as well as widely used instruments such as the Gender Equitable Men (GEM) Scale and standardized questions from the multicountry surveys on violence against women developed in partnership with the World Health Organization. Wherever quantitative data collection and analysis have occurred using the IMAGES survey, research partners also have conducted complementary qualitative studies in the same settings, seeking to document in depth the lived realities of gender inequalities, notions of masculinity and femininity, and participants’ perspectives on efforts to promote gender equality. IMAGES data make it possible to:

The infographics on this website make use of a sample of 67,202 respondents across 32 countries. Of these respondents, 50,373 are male (from 32 countries) and 16,829 are female (from 21 countries), all of whom were interviewed face to face. For 12 studies, only men’s data were collected and/or made available for the present analysis. The decision to include men alone in some locations reflected funding priorities or other local considerations. This was the least preferred option and relatively rare overall, as most studies followed the practice of asking similar questions of women and men. A focus on men and masculinities, including in sample construction, reflects the intended “value-add” of IMAGES within a prior body of evidence in which studies of violence, health, and family life generally included fewer questions for men, fewer men, or a subset of men who were sampled because of their relationships to women (i.e., husbands). IMAGES has addressed this limitation directly by focusing on men.

It is important to be cautious when making longitudinal comparisons given that data was collected over 14 years in different settings. Nevertheless, IMAGES continues to provide a unique snapshot into a global picture of gendered attitudes and behaviors. While 32 countries were harmonized in the first round, efforts in the future will be to harmonize and analyze IMAGES data collected from other countries.

IMAGES OVER THE YEARS 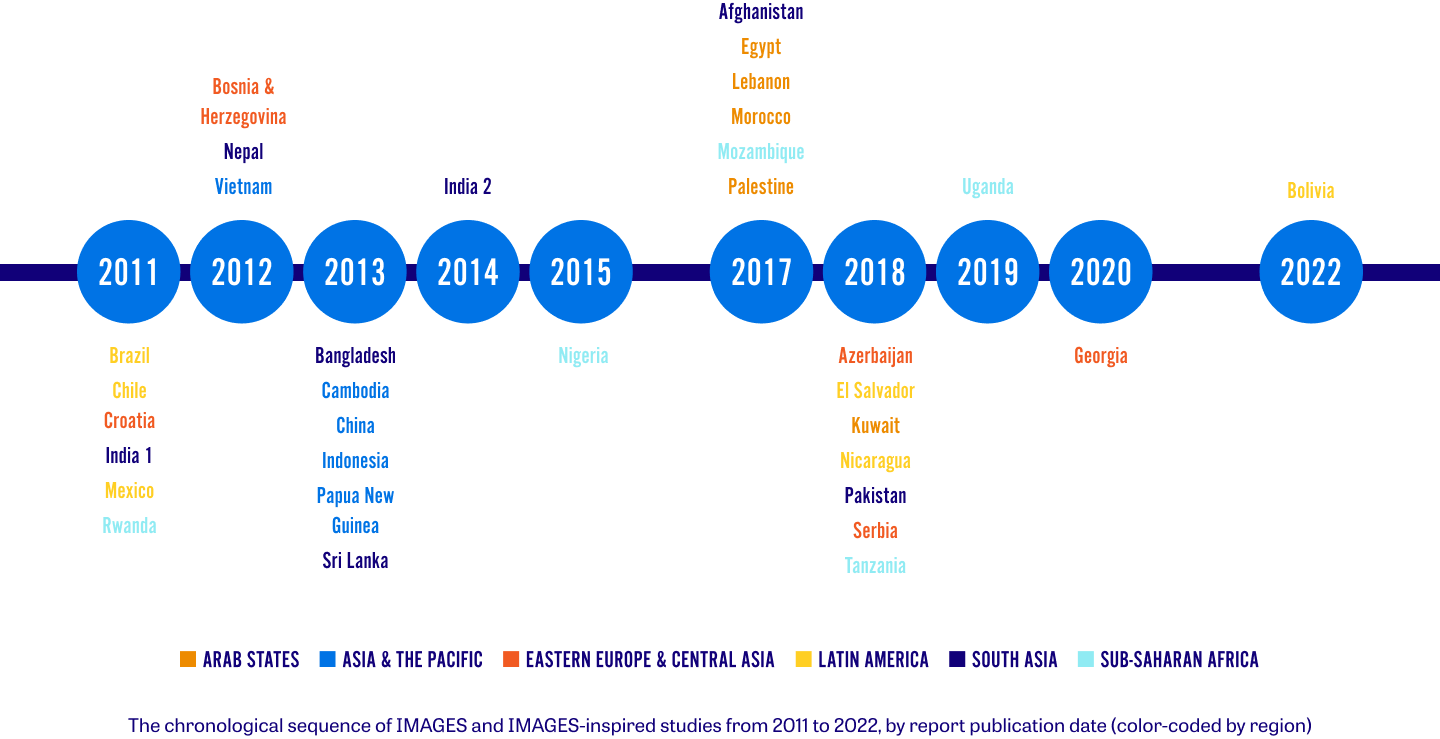 The pie charts below present the sample size (and proportion of the global sample) for each study, organized by region. They show how the samples of men and women are distributed by age (18 to 24, 25 to 34, 35 to 49, and 50-plus), education (using global standard categories), and employment status at the time of the survey. Note that the totals may on occasion not sum to 100 percent because of rounding. Overall, the age distributions of men and women are comparable, with slightly fewer women sampled in the 18 to 24 and 35 to 49 age categories and a few more women in the oldest age group (50-plus) compared to men. With regard to education, men are more concentrated in the primary and lower/upper secondary categories, while women are more concentrated in the below primary and postsecondary categories. As for employment, the sample shows nearly three-quarters (73 percent) of men were currently employed at the time of the survey, while the opposite was true for women, with nearly three-quarters not  currently employed (71 percent).

Samples were chosen to be representative of the specific geographic areas where the surveys were carried out and generally represented at least two major urban areas. Budgetary limitations meant that only some, not all, IMAGES studies achieved national representativeness in the manner of larger national initiatives, such as the Demographic and Health Surveys. Nonetheless, all samples followed best practice household sampling approaches, with samples drawn by national statistical bureaus, local census listings, and nationally recognized research firms or organizations. When displaying comparisons among subsets of respondents (whether by sex, country, region,14 or other characteristics), only findings that are statistically significant at the p < .05 level are included.

The Men and Women of IMAGES